Match Releases 10th Annual Singles in America Survey, Revealing How 2020 Has Transformed Dating
71% of Singles Spent Quarantine Without Sex, But One in Four Had Sex With Their Roommate
75% of Singles Want a Partner Who Shares Their Political Beliefs, Up 25% in Just Three Years
CLOSE

DALLAS, Oct. 6, 2020 /PRNewswire/ -- Match today released initial findings from its 10th annual Singles in America study – the nation's largest and most comprehensive annual scientific study, now studying more than 50,000 singles across the US. This 2020 data on 5,000 singles provides insight into how singles navigated dating during a year of unparalleled political, economic and social change, focusing on how the global pandemic and upcoming election transformed singles' approach to dating, sex, and love. 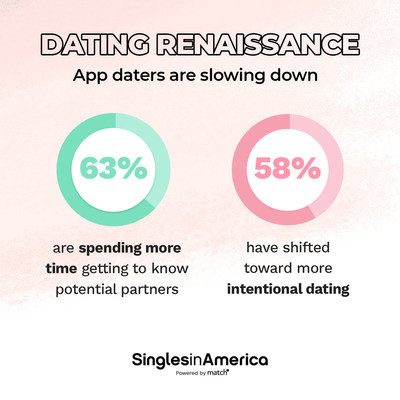 New data shares insight into how singles are dating during a year of unparalleled political, economic and social change.

"We've seen unprecedented changes in dating this year. Prior to 2020, no one expected that singles would consider a date's willingness to wear a mask. Recent cataclysmic events have led singles to want more from dating: a desire for a relationship over casual dating; more meaningful conversations, and more honesty and transparency during a date," says Dr. Helen Fisher, biological anthropologist and Chief Scientific Advisor to Match. "Today's singles want to know who you are, where you're headed financially, and what you expect from a possible partnership. And with the rise of video dating -- a new stage in the courtship process -- singles are saving time, money, and kissing fewer frogs."

2020 reinforced a trend that was happening long before the pandemic hit, with more young people waiting to establish committed partnerships in their late twenties or even later. The impact of the pandemic has further extended this process of "slow love"-- resulting in singles taking more time in getting to know potential partners, and engaging in more meaningful interactions without the pressures of where to meet, how much money to spend on a first date, or when to be physically intimate. 2020 finds singles making more time for their search, refining what they seek in a partner, and rethinking how and where they will search for love.

Meaning over Material:  Overall, 58% of single app daters1 (both men and women equally) have shifted toward more intentional dating in the wake of the pandemic. 53% of these singles are now prioritizing their search for a relationship. 52% have changed the qualities they look for in a potential partner and 44% say they had more meaningful conversations with a date in the last month (with Gen Z leading the pack at 50%).

Real Talk: Active app daters are focusing less on looks and more on honesty, transparency and meaningful conversations. 63% of active app daters are spending more time getting to know potential partners, with nearly seven in ten (69%) saying they are more honest in those interactions. 65% are more likely to ask people what kind of relationship they're looking for; and young singles in particular say they are less focused on physical attraction (61% of Gen Z and 49% of Millennials).

Let's Talk About Sex, Roomie: When it comes to where singles were finding a hook-up partner, the data shows they didn't have to go far. 41% of singles who had sex during the pandemic had it with someone they were in lockdown with, and a whopping 1 in 4 singles had sex with a non-romantic roommate (24%), increasing to 46% of Gen Z and 33% of Millennials. Sexologists call this situational sexual behavior -- in which social or environmental factors cause people to express sexual behaviors different from their previous preferences and behaviors under more normal circumstances.

The Masked Dater: While 20% of singles say they will insist that both daters wear masks throughout the date, young singles are the most open to wearing a mask while on a date (28% of Gen Z; 25% of Millennials)

Video dating solidified its place as a new stage in courtship, enabling singles to test their chemistry, or lack thereof, and get to know each other better before they meet IRL. Nearly one in five singles video dated during the pandemic (19%), including half of Gen Z singles (50%) and nearly 1/3 of Millennials (29%), an approximate 25% increase in video dating over the last 3 years.

Video Vetting: Of those singles who went on a video date during quarantine, 68% used video dating to determine whether they wanted to meet someone in real life. A further 69% of these said they'd video chat again.

The Real Me: 59% said they had more meaningful conversations during video dates, while 63% became less worried about their appearance when video dating.

Tech Troubles: Remarkably, more Gen Z singles had tech troubles than Boomers while on a video date (61% of Gen Z vs. 53% of Boomers).

Singles are now more open and upfront about serious topics. From politics to social movements to finance, singles' beliefs and preferences on substantial topics are playing a bigger role in dating.

Political Alignment: In the last 3 years of the current administration, there has been a massive 25% increase in singles who believe it's important that their potential partners share the same political beliefs. Today, 76% of singles (on both sides of the aisle) believe it is important for a potential partner to share the same political beliefs (74% Republicans; 77% Democrats), up from less than half of singles in past years. Moreover, fewer of today's singles (48%) believe they can have a relationship with someone with very different political views (54% of Republicans; 44% of Democrats), a 15% drop over the last 8 years.

Sharing is Caring: Nearly half (45%) of all singles want to know a partner's political viewpoints by the second date and 79% of singles are comfortable telling a potential dating partner their political affiliation. Gen Z Republicans are the most uncomfortable sharing their political leanings (51% of females; 50% of males), while older Democrats are most comfortable (89% of female Boomers & Gen X; 92% of male Boomers).

Undecided Singles: As of mid-August, 28% of singles were undecided voters, increasing to 40% of Gen Z. And 41% of singles are not satisfied with either candidate; particularly unsatisfied are the young (59% of Gen Z).

Switching Sides: Nearly 25% of singles changed their political affiliation during the pandemic (11% became conservative; 13% became liberal), with the highest shift among young Gen Z and Millennial singles (32%). 74% of singles are currently overwhelmed with politics, with young singles feeling the most overwhelmed (81% of Gen Z; 76% of Millennials).

Debating politics is the new foreplay: 30% of overall singles think that debating political issues with a date is sexy, with 44% of Gen Z and 36% of Millennials agreeing with this statement. More Independents enjoy debating politics (46%) compared to Democrats (33%) and Republicans (29%).

Financial freefall: Gen Z was hit the hardest by the pandemic, with 54% saying they were laid off/furloughed or they took a pay cut during the pandemic, almost three times more than Boomers (19%). 61% of singles overall said the pandemic did not affect their work or salary; 79% of Boomers said their work and salary were unaffected, while only one-third of Gen Z (36%) were not affected.

About Singles in America

Singles in America (SIA) was funded by Match and conducted by Dynata in association with renowned anthropologist Dr. Helen Fisher and evolutionary biologist Dr. Justin R. Garcia of The Kinsey Institute at Indiana University. The 2020 study is based on the attitudes and behaviors taken from a demographically representative sample of 5,000 U.S. singles between the ages of 18 to 98. Generations are defined as: Gen Z (18-22), Millennials (23-39), Gen X (40-54) and Boomers (55-74). Singles in America remains the most comprehensive annual scientific survey of single Americans. For more information, visit SinglesinAmerica.com.

Match, the dating app, is available for download on iTunes and Google Play. Users can experience Match in eight languages with membership available in 25 countries across five continents. Founded in 1995, Match is the #1 destination for singles looking for a long-term relationship and Match has created millions of love stories. Match is an operating business of Match Group (Nasdaq: MTCH) and is headquartered in Dallas, Texas.